Message to the Mayor, by David Hagan 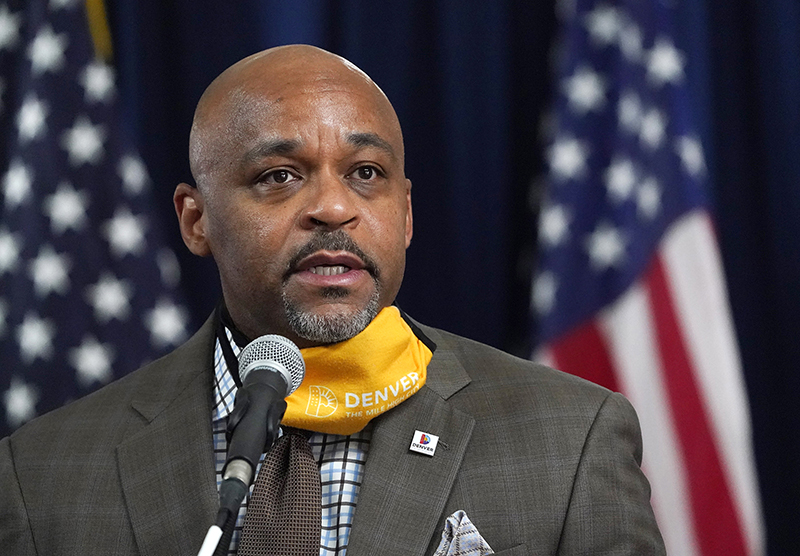 Dear Mayor Hancock,  If lives matter then why are we continuing to treat our unhoused neighbors like trash and why do we allow a 5% raise to our police department in the middle of a pandemic when many are struggling to eat. Additionally, the independent report that just came out would fire many before giving any a raise. The use of excessive force on peaceful protesters during the first 5 days of the George Floyd protest was nothing short of fascism.

Why do we say things like, “lives matter” or “all lives matter”? The use of those words promote a continued exceptionalism, white supremacy, and is down right racist. Would you interrupt a breast cancer charity event and yell, “All cancer matters”? No. Because we respect the right of the people, and we understand the need of a group(s) who’s singular focus is eliminating breast cancer. Until breast cancer is cured, groups dedicated to its eradication must exist. Right now there is a cancer in and around black lives, it is called Denver Police Department. Until we cure Denver of cancer there must be groups like BLM who are focused on a cure. We need to do everything in our power to help the Black community not degrade, as you did with your comment. We need people to change from patriarchal white supremacy to anti supremacy, from anti supremacy to allies, and From Allies to Abolitionists. It is time for us all to leave our comfortable life of privilege and start to fight for those who can’t fight. Denverites continue to amaze me on one hand I am meeting the most amazing people who, at any cost, show up day in and day out with dedication, drive, and solutions to make a Denver we can all be proud of. On the other hand I have never been more confused, disgusted, and disappointed by Denverites.

It is groups like A2A that literally give me hope so that I don’t give up on Denver when I watch my generation not only decide to not help an unhoused person, who is in serious need of medical attention, but show disdain on their faces while looking down on the man that is one step away from death. Individualism feeds the lie of American exceptionalism.

The other night I was picking up food when a man laid out half on the street and half on the sidewalk asked for help. I did my best, but was unable to help him to his feet. Assuming the man was drunk, I went inside Denver Central Market to call an ambulance and pick up my food. With food in hand, I walked back to the front door while talking to dispatch. I waited just inside the front door to stay warm while explaining the situation. No less than 10 people walked by this man and did nothing but look down on him. He slightly adjusted himself and I saw the real problem. The right half of his head was caved in. It was like a bowling ball was dropped on him from a rooftop. He wasn’t drunk; I believe he slipped and the curb broke the fall. He lost the ability to use his arms and legs like he had known for a lifetime. It is likely, he suffered a TBI.  If lives mattered, Denver would look out for its most vulnerable, Denver would have equal treatment for black lives, you wouldn’t make a racist comment, we would put the lives of people over property, we would check our privilege, demand our political leaders to work for all of us, not just those with money, but instead Denver appropriates from the very people they are forcing to leave this city. It is hard to expect the people of Denver to respect all people when the example given by our political leaders is very much the opposite (excluding Candi).

It has been said, “The greatness of a nation can be judged by how it treats its weakest member.”

What grade would you give yourself Michael B. Hancock? I give you an F. Do better or step down. Nice job of you and Governor Jared Polis to weasel your way out of testifying. Don’t worry, we know the blood is on your hands. Since we are talking about doing a bad job, thank you Polis for declining early access to vaccines for those incarcerated in Colorado.