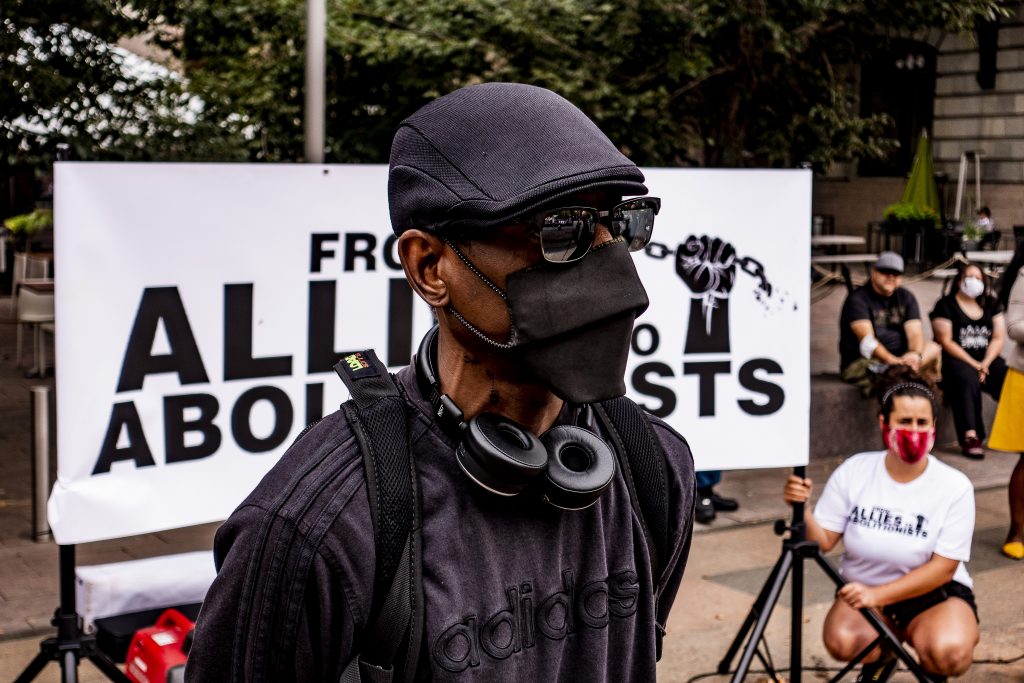 On April 20, 2018, Denver artist Raverro Stinnett left a gala just after midnight and walked to Union Station to catch a train home. When Stinnett left Union Station three hours later, he had a brain injury resulting in permanent brain damage. Raverro was beaten in a bathroom by a private security guard with Allied Universal Security, a firm working under a multi million dollar contract with the Regional Transportation District (Denver RTD). Learn more: https://www.denverpost.com/2020/04/14/rtd-allied-security-raverro-stinnett-union-station/

This last May, friends of Stinnett’s asked Jeff Campbell, the founder and executive director of Emancipation Theatre Company, to chair the Justice for Raverro campaign. They hoped to garner widespread awareness of Stinnett’s case and to pressure RTD to cut ties with Allied Universal. Campbell jumped into action. He formed an activist group called Allies to Abolitionists, pairing folks who are newer to the racial justice movement with those already on the frontlines.

We received $7,000.00 in donations that supported the campaign. Thank you to all that contributed. We received over 5,000 signatures of the petition, and 30,000 views on our public service announcement. We collaborated with the Center For Popular Democracy, and participated in their virtual conference Transformation 2020. We also collaborated with the Colorado Working Families Party, The Narrators, Playground Ensemble, and RTD Director Shontel Lewis. We co-produced a multimedia production entitled “I Am Raverro, the Story of Raverro Stinnett” with The Armory Denver, Playground Ensemble and others. We are pleased to announce that Raverro and his legal team reached a settlement agreement with Allied Universal Security Services regarding his case.

Campbell was struck by how many obstacles Stinnett had to overcome in his life — how he grew up in Montbello in a house with seven brothers and sisters. How he found his voice through his art, music and photography. How he got a scholarship to study art, and how on the night of the incident, he’d been attending an event at RedLine, where his art was on display, and where he was being celebrated as an artist. – Maggie Donahue, The Denverite

Posted in Plays and Productions