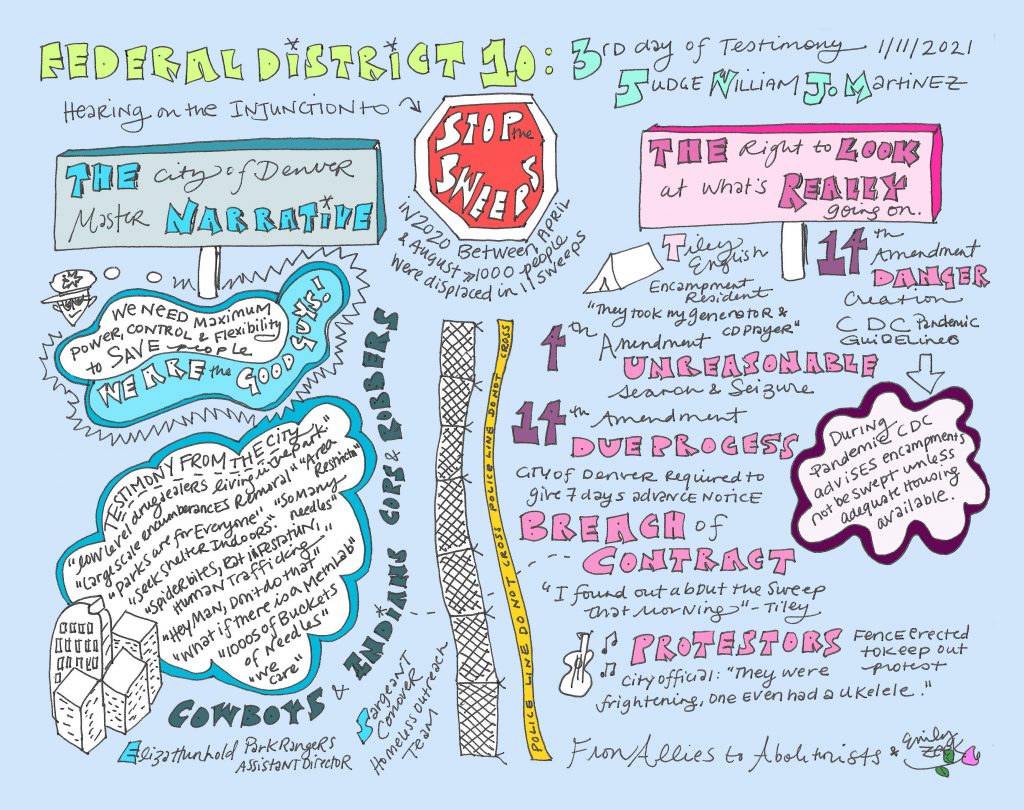 The hearing ended today without a decision by the judge. He will be deciding whether to put in place an injunction against the traumatic displacements and whether the case should proceed. This was just a evidentiary hearing. There are several displacements scheduled this week so his decision could impact residents of the encampments immediately.

There were two competing narratives on display in the hearing today. “The Master Narrative” => or the narrative of the masters … white people, rich people, men, the status quo … is very authoritarian in nature. It argues basically that the people who live in the encampments are all criminals and that the police, DOTI and DDPHE and the Park Rangers are protecting the community from these violent vagrants. It’s some kind of typical tired cops vs. robbers, cowboys & Indians, good vs. evil simplistic regressive childlike analysis of a scientific issue of public health.

As the plaintiff’s attorney pointed out though, this is completely a false narrative. The people who live in the encampments are much more likely to be *victims* of a crime than perpetrators. Ultimately they are all victims of the overarching crime of capitalism & exploitation. Not to mention the theft of their personal property, a violation of the 14th amendment. In **REALITY** the cops ARE the robbers!

The MASTER NARRATIVE would like everyone to focus on weapons and drugs found in the encampment (even tho the police never formally charged the residents and are relying on stereotyping) but the REALITY is that many households across the city have weapons and drugs inside them and yet garbage trucks don’t show up at their door destroying their personal property because of it.

The difference here is that because residents of the encampments are living on the street their belongings are on full display. They are picking on these people because they are vulnerable and without shelter they are an easy target. At least the judge was able to sympathize with the plight of those living outside and recognized that they are just trying to survive.

DPD and DOTI and DPD meanwhile are not following any public health guidelines to conduct these damaging and traumatic displacements. They are cowboys fighting the bad guys => poor people! The heck with science, logic or reason. This is the Wild West the government does as it pleases! In fact till the very end of the hearing the defense attorneys were begging the judge for infinite power and control and flexibility because of the “thousands upon thousands of buckets of needles found.” Give me a break!

Officials were even holding back dates and time from the public and residents of the encampments about when the displacements would occur because organizers of the actions were getting their pictures taken by protestors and people with ukulele’s were frightening them. (Yes this was part of the testimony of the city officials)

Ultimately these traumatic displacements are happening for political reasons. The prevailing science is that indoor spaces are less safe than the outdoors in this pandemic yet these citizens are not being provided the same considerations of public health as the rest of the public. That’s because the city can’t move beyond thinking of issues from a childlike lens of good vs. evil into a mature adult lens of science and responsibility and public health.

Let’s hope the judge can see through their theatrics.

#messagetothemayor#endthesweeps From Allies to Abolitionists