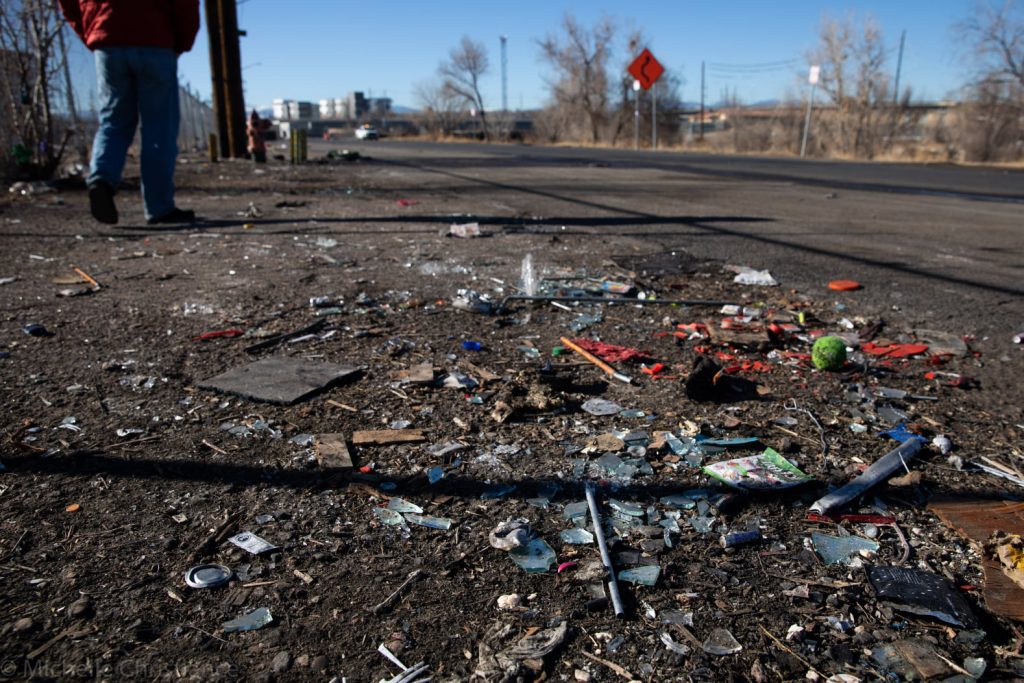 We at From Allies to Abolitionists note with some satisfaction Westword’s report of 26 January 2021 that the Mayor has seen the newly dropped video “Message to the Mayor” by Kid Astronaut (John Shockness), Apostle (Jeff Campbell), Bumpy Chill (Adrean Jones), Kingdom (Jeffrey McWhorter) and Mizta Sandman (Shannon Richardson), in collaboration with producer Mic Coates.

The experience of this powerful new work exposes the continued deadly injustice of the City of Denver’s policies toward our houseless neighbors. These most vulnerable of our citizens, disproportionately peoples of color, veterans, those with mental and physical disabilities, queer and trans youth, and other members of marginalized communities, are regularly set upon by cops and staff from the Department of Transportation and Infrastructure, and Denver Department of Public Health and Environment in traumatic displacements that have come to be known by the white-washed term “sweeps.”

However, if the “Message to the Mayor” (both a campaign and a song) was indeed heard, it did not sink in. In the same Westword story, by Conor McCormick Cavanagh, Mayoral Spokesperson Theresa Marchetta is quoted in response to our local artists’ music, truth and activism, saying:

“When it comes to street homelessness and encampments, our highest priority is to connect people with services, shelter, housing, family, treatment or care. We have a half-dozen different outreach teams engaged in this difficult but important work. Last year alone, the Denver Street Outreach Collaborative successfully placed 334 people in stable housing, and we prevented thousands more from becoming homeless in the first place. There are numerous public health, sanitation and safety hazards – disease, drug abuse, rodents, human waste and violence — that encampments pose to the people living in them and to the general public….We remain committed to standing up more and better shelters and affordable housing, increasing mental health care and substance abuse treatment, and delivering alternative options such as two tiny home villages and managed campsites.”

On behalf of From Allies to Abolitionists, we must call these assertions disingenuous at best, and criminally misleading, at worst. This hollow, hackneyed rhetoric is yet another example of the false narrative the mayor has been selling—one that abounds with disinformation and subversive motives. As such, we have a reply of our own…

“When it comes to street homelessness and encampments, our highest priority is to connect people with services, shelter, housing, family, treatment or care.”

Claiming “connections to services” as the city’s highest priorities overlooks the fact that these traumatic displacements cyclically destabilize individuals and street communities, cutting people off from desperately needed services, severing their fragile ties to mental health/housing case workers, and making their efforts to survive outside even more difficult.

Caging in unhoused residents with 7-foot fencing before nearly every sweep since September and then severely overstaffing police officers to “protect” against mutual aid workers, and yes, the occasionally righteous protester, reveals the city’s true priorities—intimidation, escalation and profiteering. As reporting from The Denver Post has revealed in recent weeks, hundreds of thousands of tax dollars were spent in 2020 on these repetitive unhoused sweeps for environmental cleanup contractors alone. An ongoing People’s Audit of DOTI, DDPHE, Denver Parks and Rec, and DPD is establishing a comprehensive cost assessment of these actions, which will likely soar into the millions.

Another large-scale “sweep” is scheduled for tomorrow, January 27th, at the 21st/22nd and Stout/Park intersections. As they do every week, the action will begin before sunrise, when the weather is forecasted to be 16 degrees. This area is the central hub for unhoused service providers in the city, including Denver Homeless Out Loud, the Stout Street Clinic, and the Colorado Coalition for the Homeless, among others. Forcibly removing more than 100 unhoused residents from this area will disrupt their access to these life-saving services. This is the 10th time in the past year that this area has been targeted by the city. Such repetitive harassment proves the futility of the Mayor’s strategy, and flies in the face of the City’s stated priorities.

“We have a half-dozen different outreach teams engaged in this difficult but important work. Last year alone, the Denver Street Outreach Collaborative successfully placed 334 people in stable housing, and we prevented thousands more from becoming homeless in the first place.”

While limited services are offered by the city prior to and at these operations, they are inconsistent and unappealing to many of the City’s unhoused, even at the best of times, let alone in the midst of this pandemic. Shelters remain overcrowded, underfunded, and complicated by rules that separate couples, prohibit pets, and unfairly police residents’ behavior. Thousands of people in Denver are experiencing homelessness, housing instability and food insecurity for the first time this year, so while placing 334 people in stable (not necessarily permanent) housing is appreciated, it is far from adequate, and certainly not a laurel to rest on.

Additionally, as reported in a December ColoradoPolitics article, “The most recent Point-in-Time count of homelessness conducted by the Metro Denver Homeless Initiative found there were at least 4,171 individuals experiencing homelessness in Denver in late January. Nearly a thousand of them were living unsheltered, and more than 500 were fleeing domestic violence.” Subjecting hundreds of victims of domestic violence to the additional trauma of these sweeps is beyond cruel, while offering congregate shelters as their only recourse is negligent and unreasonable. What’s more, these numbers reflect a pre-pandemic account of Denver’s unhoused crisis, which has severely worsened in the past 10 months.

“There are numerous public health, sanitation and safety hazards – disease, drug abuse, rodents, human waste and violence — that encampments pose to the people living in them and to the general public….”

As was argued in the recent federal case brought against the city by Denver Homeless Out Loud, these “sweeps” only exacerbate such issues of sanitation and safety in the long run, which is what makes the term so painfully accurate—these actions do nothing but temporarily “sweep” crises under the rug—or to the next block.

The Center for Disease Control and peer-reviewed scholarship have shown that the traumatic displacements the City inflicts on the unhoused do not relieve such problems as “disease, drug abuse, rodents, human waste and violence;” they simply move them to another location by forced displacement and worsen these problems for those most susceptible to harm. Safe Outdoor Spaces with bathrooms, hand washing stations, and regularly serviced trash cans are the solution to preventing disease, not an endless cycle of sweeps.

While we are glad to see Marchetta applaud the “tiny home villages” and “managed campsites” (we assume by the latter she means the two—so far—Safe Outdoor Spaces established and maintained by Colorado Village Collaborative and the Interfaith Alliance), these were initiatives originally outside the auspices of City government. The City only “jumped on board” after sustained support by community groups and grassroots efforts.

With that said, we call on the Mayor to look at the video again, and we invite all concerned citizens everywhere to see it was well. The documentary footage of Denver cops “engaging” with our houseless neighbors and their advocates (included in the “Message to the Mayor” music video) speaks for itself. These violent and oppressive tactics, and the strategies behind them, are not the solution. The solution is Housing First. And in the meantime, we demand properly staffed and maintained 24/7 sanitation facilities, more Safe Outdoor Spaces with heating and humane security procedures, and an end to the sweeps. These are all realistic emergency measures that would address the issues the Mayor’s Spokesperson cites as their “priorities”.

These horrendous times call on all of us to transcend the empty slogan “We Can Do Better” . . . and actually start doing so.